so you want to build an EFHW with QRP traps...

April 28, 2017
This is a very preliminary posting as I seek better understanding of how to post here...

I have been exploring use of tiny traps in an EFHW wire since 2012 as a way to switch bands instantantly while maintaining a 50 ohm load for my KD1JV series transcievers.

Below you see one construct using an SMD capacitor and hand wound air core inductor.  The inductor is 1/2 inch in diameter.  In this case, the capacitor is 100pF and the coil is 24 turns.  This yields approximate frequency of 10.0 for the 30M trap. 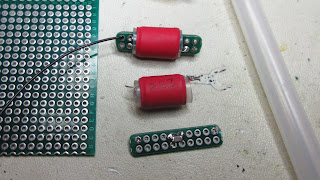 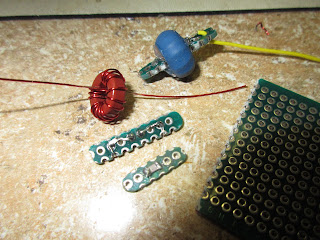 Above you see the components and a completed trap using a toroid inductor and an SMD capacitor.  You can see in each photo; how strain relief works.

Early attempts to build miniature trapped antennas for use on SOTA (Summits on The Air) all "worked," but with frustrations to tune.  The lengths of the wires weren't as expected, and adjusting wire lengths on lower bands (beyond a trap) impacted the higher bands that came before them.  It shouldn't.

After a lot of trial and error, John, K1JD, and I, think we have learned that:

* The trap must be tuned below but close to the frequency of intended use.  Compared to commercial traps, these do not present as high an impedance, so they will work better as traps if tuned closer to the design frequency than commerical traps are generally tuned.

* Less C and more L in general will result in a broader band-width.More C and less L may be smaller, lighter, and easier to build, but if the C is, say, 100 pF, band width is quite narrow, while if C is below say, 40 pF, it can be many times broader.

* The T37 core is too small to get enough inductance onto it for pleasant broadbanding.

* The air core approach is elegant, but with enough inductance for broadbanding, it is quite large and heavy

. A handy online calculator is here: impedance of a resonant circuit

I have reached the point where I can get fairly consistent results for a 20/30/40 EFHW trapped wire.


Some more (I think significant) notes:

> For trap after trap with various L/C combinations, some with air core, some with toroid, but all tuned between 13.9 and 14.1, the 20M wire length is exactly the same, 32-4.  This length is exactly what one would expect given the velocity factor of about 95% for this insulated wire #26 teflon wire.

> I find no difference in wire lengths for #24 and #26 teflon wire, but #28 teflon wire tunes slightly shorter suggesting its velocity factor may be 94% instead of 95%.

> Of course the 30M and 40M wire lengths varied with the L/C ratio of the traps.  In all cases and exactly as one would expect, the more the inductance in the preceding trap, the shorter the wire on the next lower band

> The bandwidth on the highest band when using a trap with a relatively high capacitance (of 100pF) was only about 100 khz.  Bandwidth changes exponentially as the capacitance is reduced and inductance increased.

> The band width of the high frequency band was about 400 khz, exactly the same as I find with a monoband EFHW

> bandwidth on the lower bands (past the first trap) is much lower, and the same for each.

> I don't know how to separate loss due to traps, ande loss due to antenna shortening.  BUT ... in groundwave tests so far, the loss through one traps was neglible, and the foreshortening on that one band was only 20% which also is said to have a neglible effect.  Groundwave tests through two traps was detectible, in the vicinity of two; DB, and that wire length was foreshortened by 30% which is not neglible.

Note that an infinite number of different L/C ratios will achieve a tuned circuit.  What I am offering below is something that has worked for me.  Understand that the capacitors have a tolerance variation, so do the toroid cores.  Understand just the height and way you deploy your wire will cause considerable variation in the wire lengths that will be resonant.  I deploy my wire as an inverted L with the wire descending a 20 ft tall fishingpole with somje carbon fiber in it.

With those caveats, here goes:

This antenna requires an appropriate impedance transformer.  Impedance at the end of a halfwave will be very high, beyond the range of typical tuning units.

Popular posts from this blog 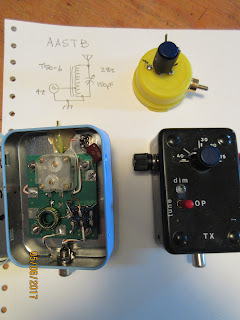 FEEDING AN EFHW ANTENNA The EFHW is a convenient way to feed an antenna when QRP on a SOTA peak.  There is very little current on the end of the wire so losses to ground are minimized even when the end of the wire is near the ground.  The feedline can be short or even non-existent. Impedance at the end of a halfwave antenna is very high, typically over 3,000 ohms.  Little or no counterpoise (radial) is required, but an ATU will not handle such a high impedance. I know of three ways to feed it.  If one wants to use an ATU, feeding the EFHW through a 9:1 balun should bring the impedance down into a range where the ATU can handle it.  There will be loss in both the 9:1 balun and in the ATU. AA5TB pioneered a simple tuner which was later kitted by Eric, KI6J, and then copied by many others including Hendricks, SOTABEAMS, and now QRPGUYS dot com.  I did repeated tests with several of my homebrew versions of this tuner.  Loss when properly tuned is typically about .7 wat
Read more